Trade all the major global economic data live as it populates in the economic calendar and follow the live coverage for key events listed in the DailyFX Webinars. We’d love to have you along.

The anti-risk Swiss Franc outperformed against its major counterparts on Thursday despite an overall uptick in sentiment, even outperforming the similarly-behaving Japanese Yen. Franc gains picked up against the Yen heading into the European trading session as Nikkei 225 and S&P 500 futures pushed higher in the aftermath of a dovish Fed interest rate announcement, perhaps reflecting Yen-based carry demand.

Then, EURCHF sunk and closed at its lowest since July 2017 on the 15-minute chart below. Equities cautiously retreated on US-Iran tension fears during the Wall Street trading session. US President Donald Trump tweeted that we will “soon find out” if the nation will strike Iran after it reportedly shot down a US drone. USDCHF closed at its lowest since the beginning of this year. 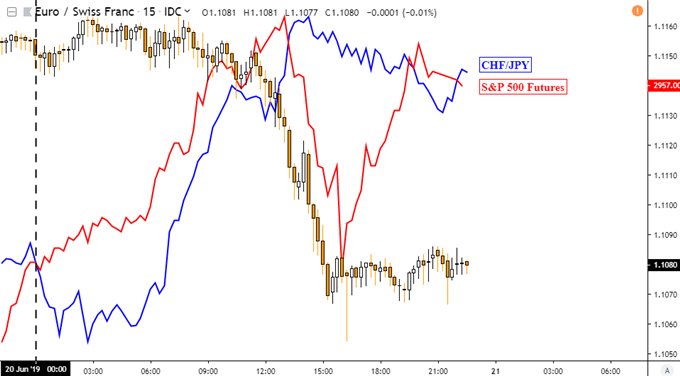 Speaking of the US Dollar, the Greenback continued depreciating and was the worst-performing major. It tracked ongoing declines in US government bond yields as the markets confidently price in the first Fed rate cut since 2008 next month. The S&P 500 closed eight points above highs in April, making for a new record as the Dow Jones rose about one percent.

The DXY, while succumbing to selling pressure, was unable to clear the rising trend line from September 2018 on the daily chart below. This continues to further solidify support. Meanwhile, positive RSI divergence shows fading downside momentum which can precede a turn higher. Near-term resistance appears to be around 97.52. 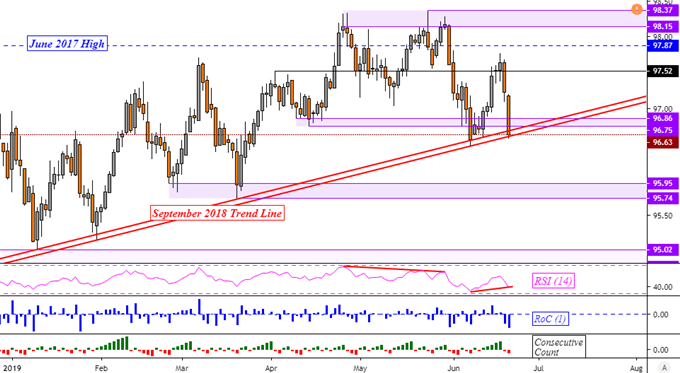 Despite the gains in equities, S&P 500 futures are now pointing decisively lower heading into Friday’s Asia Pacific trading session. This could be due to traders hesitation to commit to upside breakouts in equities ahead of next week’s G20 summit where we will get a better idea of where US-China trade tensions could go. This leaves the pro-risk Australian and New Zealand Dollars vulnerable in the near-term.

Dow Rallies as Nasdaq 100 Drops – Swapping Trends or Topping Out?